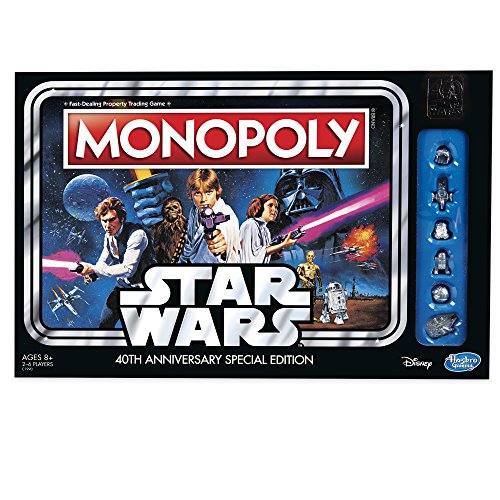 Celebrate the 40th anniversary of the movie that started it all.
Relive the original star wars story as you travel around a galaxy far, far away.
Collect classic scenes and iconic ships from the 1977 movie and make a fortune.

It is the Fast-Dealing Property Trading Game taken to a galaxy far, far away! Celebrate the 40th anniversary of the original Star Wars movie with this special edition of the Monopoly game. Players can relive the tale of Star Wars: A New Hope as they go back and forth across the board. Collect memorable scenes and iconic ships inspired by the 1977 movie. Toughen power and influence over opponents by building Fleets and Bases. Force and Smuggler’s Cargo cards shape players’ destinies on this exciting game. The one player left after everyone else has gone bankrupt wins! The Hasbro Gaming, Parker Brothers, and Monopoly names and logos, the distinctive design of the gameboard, the four corner squares, the Mr. Monopoly name and character, in addition to each and every of the distinctive elements of the board and playing pieces are trademarks of Hasbro for its property trading game and game equipment. Star Wars products are produced by Hasbro under license from Lucasfilm Ltd.
Celebrate the 40th anniversary of the movie that began it all.
Relive the original star wars story as you go back and forth around a galaxy far, far away.
Collect classic scenes and iconic ships from the 1977 movie and make a fortune.
Build fleets and bases, and side with the rebels or the empire.
Includes,gameboard, 6 tokens, 28 title deed cards, 16 force cards, 16 smuggler’s cargo cards, 32 fleets, 12 bases, 2 dice, money pack, and game guide.

Scroll back to top